The new Department of Labor employment data confirms that when it comes to the economy, America is on two divergent paths. Blue states are losing jobs at record pace and red states are gaining them.

Ten states had unemployment rates in May above 15 percent.  They are all states with Democratic governors, with the exception of Deep Blue Massachusetts with its liberal Republican governor Charlie Baker. 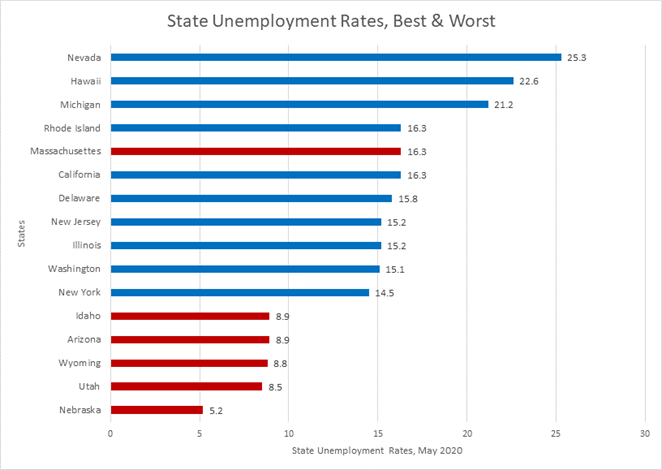 This is not a coronavirus recession. It is a blue state lockdown recession. Democrats say they have shut down their economies for health reasons, but these are also the states that generally have had the highest death rates and the highest nursing home fatalities. So the blue states have not only failed to keep their citizens safe, they’ve ruined their economies as well. Democrats are promising to make America look more like New Jersey, Washington, and California. God forbid.

The United States reported a total of 297 COVID deaths yesterday, the lowest daily total since March 24 – which was TWO months ago.  We’re down 90% from the peak.  But that doesn’t generate breaking news alerts and banner headlines the way new high tolls on the way up the curve did.  Instead the media has stopped talking about deaths and wants to talk about cases.

As Oxford’s ace epidemiologist Suneptra Gupta warned: “Rise in cases is completely contingent on how many tests are done and not a good source of data to fit any model to.”

But with media narratives based on cases threatening to reimpose lockdowns or scare businesses like Apple into shutting stores, we don’t have the luxury of simply ignoring rising cases.

So let’s try to make sense of what’s going on.

In the parlance of COVID, a “case” means anyone who tests positive, even with no clinical disease.  Those positive test results jumped dramatically in some states in recent week, driving a round of media-stoked fear and hysteria.  But there is a clear discontinuity in the data.  As this chart from the popular Twitter account The Ethical Skeptic shows: 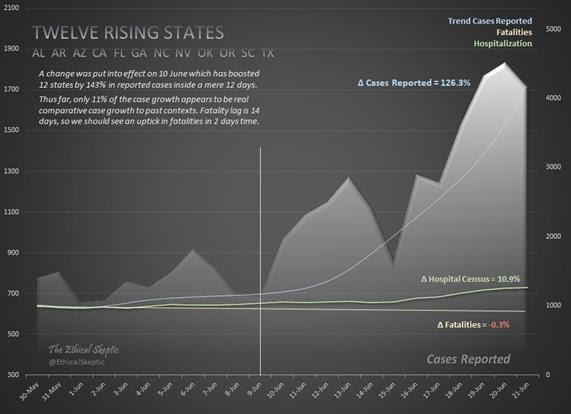 The New York Times says that positive cases are up faster than testing, i.e. a higher percentage of people tested are infected. There are many problems with that analysis (including vast underreporting of negative test results).  But this also ignores that we are not only testing on a vastly larger scale, but we are testing a qualitatively different population.  Much younger and much healthier, as many employers test everyone returning to work, colleges test athletes coming to training camps, state testing programs are opened to people without symptoms, hotspot testing becomes universal at places like prisons and meatpacking plants, and tracing systems find and test contacts of known positives.

The clearest trend in the new data is the sharp drop in average age testing positive, which as Governor Ron DeSantis explained fell from over 60 two months ago to just 37 in the past week.  As cases trend younger, they are far less likely to be hospitalized, and that’s what we see in Florida.

Similarly, this chart from our friend Chuck Devore of the Texas Public Policy Foundation shows that cases have been rising faster than deaths in Texas as testing expands to a younger population: 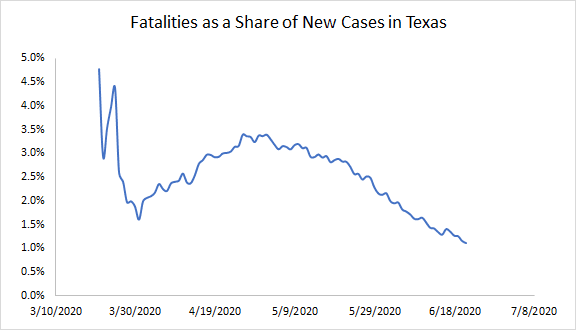 Very few of the newly captured cases are likely to become seriously ill or die.  And given that until very recently we were not testing this population, we have no way to know whether the positivity rates now being captured are new or have been there undetected for months.


3) The Myth of Coronavirus Surging across South and West

Part of the media’s hysteria campaign is to discredit the red states that opened up early.  Our friend Edwin T. Burton, an economist at University of Virginia, has poked all sorts of holes in this tale. We excerpt from his latest analysis:

The Washington Post article [on the surge] references only 5 states: Florida, Arizona, Nevada, South Carolina and Oklahoma.  So, what is happening in these five states/  The article makes it sound like these states are disasters.  Are they?

For the US as a whole, the deaths per million is 367.  This number is taken from:

So, what are the deaths per million in Florida, Arizona, Nevada, South Carolina and Oklahoma? 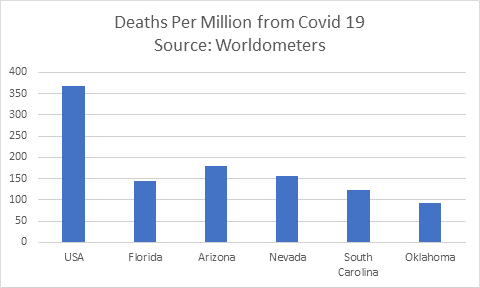 So, one would guess that these five states are surging in hospitalizations and deaths.  The Post simply leaves this information up to the reader’s imagination.  Why don’t we help out here with a few facts?

1) There has been no increase in hospitalizations resulting from COVID-19 since the re-opening on May 1st in this group of states taken together.

2) There is a significant decline in the daily deaths for these five states taken together since the re-opening on May 1st.

New York City restaurants open for indoor dining today after three months of lockdown.  The tragic costs of the lockdown include not just lives but thousands of the city’s small businesses, 62 percent of which employ five people or less.

“We are definitely going to lose a lot of them, regardless of how much we do, because some were on thin ice during an era of prosperity,” Kathy Wylde, head of the pro-business Partnership for New York City, told politico.com.  “They are not going to survive, no matter what anybody does.”

The biggest problem for many shops is paying the rent. The Brooklyn Chamber of Commerce found 46 percent of businesses missed their May rent payments. A similar survey from the hospitality alliance found 87 percent of bars and restaurants couldn’t make rent last month.

The nation marked “Juneteenth” – the anniversary of the last Civil War slaves to learn they’d been freed – last Friday.  Our friends at the Atlas Society have put together a stirring video on just what that freedom represented, telling it through the eyes of famous abolitionist and freed slave Frederick Douglass.


“You are a man, and so am I,” Douglass told his former master. “In leaving you, I took nothing but what belonged to me, and in no way lessened your means for obtaining an honest living.” Referring to his first job after his escape from bondage at age 21, Douglass wrote: “I was now my own master—a tremendous fact.”

As the historian Carl Guarneri has noted, most pre-Civil War socialists “were hostile or at least indifferent to the abolitionist appeal because they believed that it diverted attention from the serious problems facing northern workers with the onset of industrial capitalism.” The true path forward, the socialists said, was the path of anti-capitalism.

But it was a view that was even popular among apologists for slavery.  The South’s leading pro-slavery intellectual, the writer George Fitzhugh, argued that free labor was “worse than slavery” because it meant that the capitalists were free to exploit the workers. The idea that “individuals and peoples prosper most when governed least,” Fitzhugh wrote, was nothing but a lie: “It has been justly observed that under this system the rich are continually growing richer and the poor poorer.”

Douglass scoffed at Fitzhugh’s arguments and embraced the philosopher John Locke’s notion of private property emerging when man mixes his labor with the natural world: “Is it not astonishing that, while we are plowing, planting, and reaping, using all kinds of mechanical tools, erecting houses,” he marveled, “we are called upon to prove that we are men!”

Andy Ngo is one brave journalist. Last year, he was set upon and injured by masked and screaming Antifa bullies as he tried to cover their rallies in Portland, Oregon. James Gagliano, a CNN law enforcement analyst, said “the visual images are sickening…. simply bearing a name that says you’re opposed to evil, like anti-fascist, should not inure us to your unprovoked violence and unconstitutional attempts to block others’ free speech rights.”

Here are some excerpts.

“During five undercover days and nights in the zone, I witnessed a continuing experiment in anarchy, chaos and brute-force criminality. ….On Saturday morning, a shooting erupted that left at least one person dead and another injured near a border checkpoint. Police were reportedly met with resistance when they tried to get to the victims, who apparently were then taken in private cars to the hospital.”

“Lacking agreed-upon leadership, those who have naturally risen to the top have done so with force or intimidation. For example, rapper Raz Simone, real name Solomon Simone, patrols CHAZ on some nights with an armed entourage. Simone, originally from Georgia, has an arrest record for child cruelty and other charges.”

“Attacks on journalists who are accused of not toeing the line have become commonplace. On Monday, a masked Antifa militant pointed me out to her comrades and tried to assemble a mob. I left before I could be injured. The following day, a Fox News crew was forced out of the zone.”


7) Postcard From Oregon: “Going out I nearly feel a fugitive”

The excellent British website “Lockdown Skeptics” has run a series of essays by writers from around the world on the destructive impact of the virus lockdowns in their communities.

Their latest is “Postcard from Oregon” and was written by a retired journalist.  It’s poignant, informative and worth the read.

“Even now, going out I nearly feel a fugitive, as if a weekly trip to buy food, supplies, and medicines is committing a terrible wrong against society. A wet, live layer of fear and suspicion drips from everything and everyone. Those of us not masked or distanced are given dirty looks, parents clutch their masked children away from us as we pass, and we get rude or even silent customer service in stores. Unkind words, insults and epithets are uttered publicly. Shame is in abundance. Rational discussion has become scarce. It rapidly descends into hostility and arguing. Comments are flagged and blocked, social accounts get banned. Messages to local officials are ignored or disparaged.

“Being disabled and living in poverty, I have only an old PC and a cellular data connection for my window on the world. I almost never visit YouTube and make only limited use of mainstream media or social media, and do not watch TV.

“Yet I find myself vastly more informed on the the virus and lockdowns than most of the local community. With each new daily bit of data coming out my initial sense of fear and anxiety went away but was replaced with frustration. If a layperson like me with only a phone can be well-informed, then how can the people running the show be so poorly informed?…..

“Gather and disseminate facts, ask the hard questions, demand answers, and do what you can to help our communities and countries return to reality, so we can all live fearless, healthy, happy, and free.”

“Lockdowns were desperate, defendable choices when we knew little about COVID. But, now that we know more, we should avoid exaggeration. We should carefully and gradually remove lockdown measures…Otherwise, prolonged lockdowns may become mass suicide.” 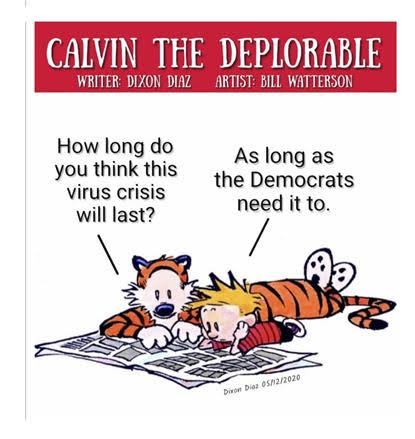